The most widely known eruption of Mount Vesuvius occurred in 79 AD and destroyed two big cities. Can the tragedy repeat?

After almost 2, 000 years, the eruption of Mount Vesuvius remains one of the most devastating natural disasters that claimed thousands of lives. As it occurred on August 24, 79 AD, this day is traditionally called Vesuvius Day. What happened to Pompeii and Herculaneum what killed so many people, and can the tragedy happen again?


Precursors of the Catastrophe

The story started 17 years before the eruption, in 62 AD, when a powerful earthquake occurred in the same area, around the Bay of Naples. Two years later, there was another one, less disastrous, and in 79 AD there were some minor earth tremors, too. Why didn't the inhabitants of the region get worried about these signs?

In fact, people who lived in Campania (today a province of Southern Italy) were used to such events and paid little attention to the foreshocks. Moreover, they didn't even know that Vesuvius was an active volcano! This was, of course, a huge mistake - it took the volcano 25 hours only to destroy Pompeii. 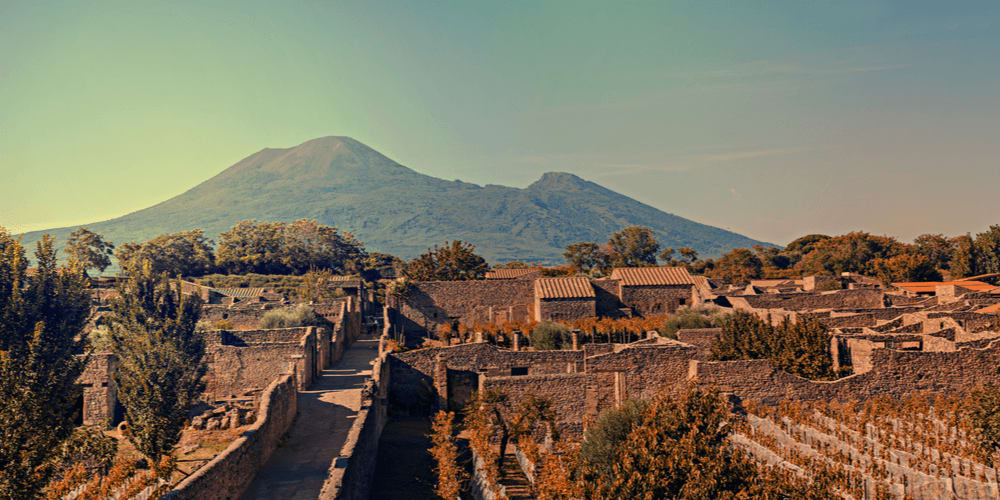 After so many years, it's hard for historians to provide us with the details of the disaster. In fact, Pliny the Younger, who was only 17 years old when the volcano erupted, was the only eyewitness who left two letters describing the event. He stayed at Misenum, a port located about 22 miles away from Vesuvius, refusing to join his uncle Pliny the Elder. The latter decided to look closer, and it cost him his life - the notable Roman philosopher was overtaken by dangerous gases released from Vesuvius and died.

The first signs of the eruption appeared at about 8 a.m. on August 24, 79 AD, gradually becoming more and more violent. At 1 p.m., Mount Vesuvius was already erupting intensely and people from the nearby towns and settlements were trying to escape. Almost 2,000 Pompeii inhabitants survived then only to die the next morning after the second eruption of suffocation and incineration. On August 25, rain mixed with ash and the town was buried under a thick layer of concrete that formed in the result. The town of Herculaneum located nearby suffered almost the same fate - it was destroyed and covered by the mudslide caused by the eruption. 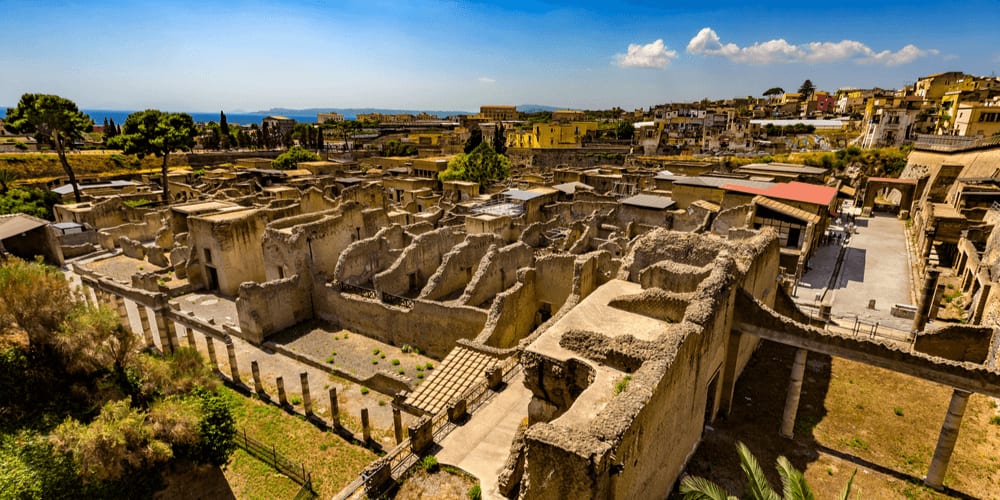 Today it's hard to say how many people were killed when Vesuvius erupted in 79 AD - the number varies from about 1,000 to 30,000 casualties. The remains of 1,044 bodies have been found in and around Pompeii by 2003, and 332 bodies were found in Herculaneum. Despite the fact that this town was located much closer to Mount Vesuvius than Pompeii, it suffered fewer losses than Pompeii thanks to the wind direction. However, it didn't save the town that was later covered by a 75-foot thick layer of ash and other materials brought by the eruption.

Scientists have found out that the majority of people whose bodies were uncovered in Pompeii and Herculaneum died of roof collapses, as the inhabitants of the towns were trying to find a shelter in buildings that were later ruined. The pyroclastic surge deposits killed thousands of others. However, a study made in 2010 indicates that the temperatures in the area during the eruption reached 572°F, which proves the hypothesis that many people were literally burnt alive. 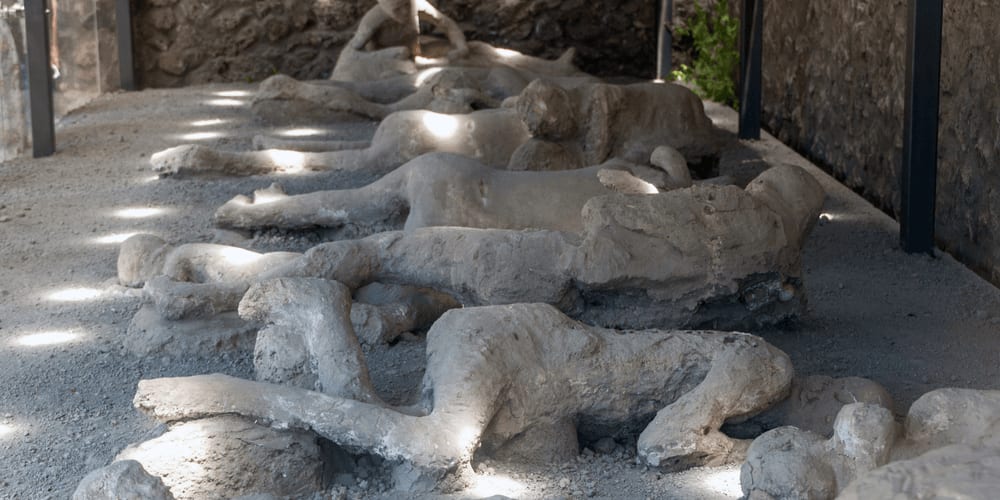 Can a Similar Catastrophe Happen Today?

The question that is of great importance now is whether Mount Vesuvius can erupt and what consequences can be expected. The answer to the first one is yes, it can. Vesuvius is the only active volcano in Europe: it erupted in 1631 again killing 3,360 people, and its most recent eruption occurred in March 1944. Researchers have been studying the volcano for a long time and the importance of these studies can't be overestimated. A possible eruption threatens the life and health of more than 3 million people who live close to the volcano's slopes or on them. 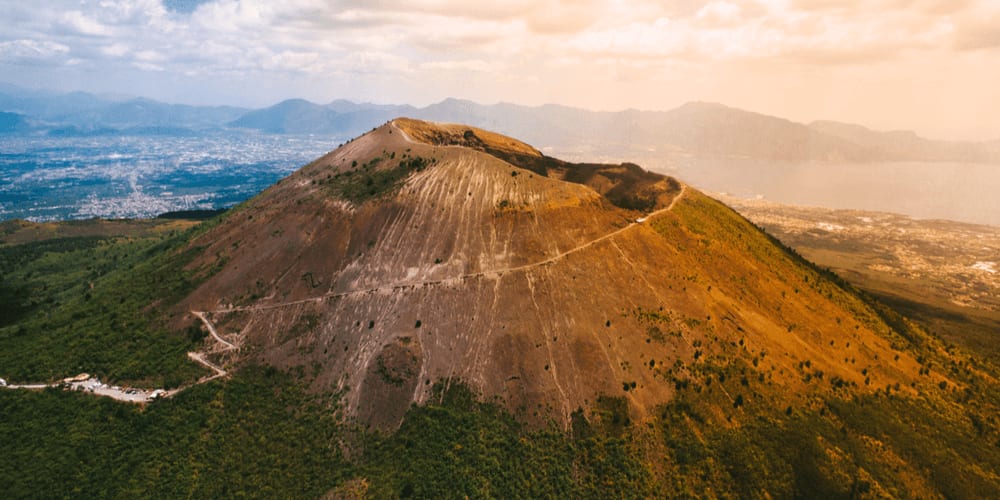 August 24, 79 AD was an awful day in the history of humanity. Not to let it pass into oblivion, you can invent your own ways of commemorating the date.

Choose any of the activities mentioned above or think of another one if you want to help the tragic event survive in the memory of people. Be careful and never ignore natural disaster warnings!

Quick quiz
Test your knowledge of the world now!
Play Quiz
The deadly magnificent Yellowstone
American nature sometimes can be scary! Read about Yellowstone supervolcano and prepare to be thrilled!
journeymash.com
World Cuisine Recipes: Indian Beef Curry
Our delicious journey to India starts now! Create fantastic aromas in your kitchen with this easy beef curry. We’re convinced that this is one of the best beef recipes in the world: it will make you mop your plate clean!
journeymash.com
Feel the nomadic mood! Play with your friends, test your knowledge of various countries, plan your vacation, and explore the world. Visit Italy, France, Morocco, and many other countries without worrying about travel safety or getting travel insurance – traveling online is as safe as it can be!
This Month Top 5 Players
slyphil45
88580
2
ejlong1
66419
3
Dennis
20802
4
Randy
17310
5
LYNISE
12752
JOIN RATING
Popular on TriviaBuzz

Can you tell the difference between fact and fiction? Click Yes or No to answer simple yet interesting questions.
TRY NOW